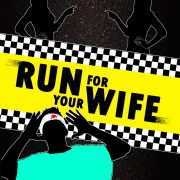 Morpheus Theatre is pleased to announce the cast of our 22nd season opener – Run For Your Wife.

Thank you to everyone who came out for the auditions.