Join us for our TWENTY-FIFTH SEASON of Shows Worth Seeing. Click here to Download the Season Ticket Brochure (0.5 mb file).

Show times are Wednesday to Saturday at 7:30pm.  Weekend matinees are at 2:00pm.

All performances are at the Pumphouse Theatre, 2140 Pumphouse Avenue SW 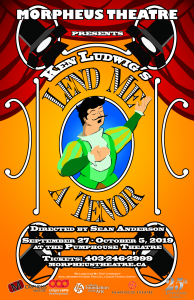 Lend Me a Tenor

September 27 to October 5, 2019
By Ken Ludwig
Directed by Sean Anderson

It’s September 8, 1934 – the biggest night in the history of the Cleveland Grand Opera Company. The world-famous Tenor, Tito Merelli, known as Il Stupendo, is set to appear for one night only as the star of the opera, at the ten-year anniversary gala season opener. Tito arrives late, and through a hilarious series of mishaps, he is given a double dose of tranquilizers and passes out. Tito is believed to be dead and everyone is in a panic. In a frantic attempt to save the evening and fool the audience, Tito is replaced by Max, an assistant with little stage training. But when the real Tenor suddenly awakens and gets into costume, the chaos of mistaken identities, mixed signals and misunderstandings has everyone scrambling! A sensation on Broadway and in London’s West End, this madcap, zany farce is guaranteed to leave audiences teary-eyed with laughter. 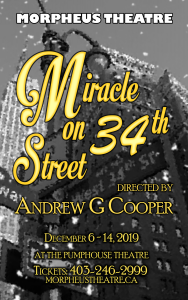 December 6 to 14, 2019
Adapted by Mountain Community Theater from the novel by Valentine Davies. Based upon the Twentieth Century Fox motion picture Miracle on 34th Street.
Directed by Andrew G. Cooper

When Kris Kringle, a nice old man from a retirement home gets a job working as a Christmas Santa at Macy’s, his honest and generous spirit unleashes waves of good will throughout New York City, and a hint of magic in the heart of a very practical little girl. Seen as deluded and dangerous by Macy’s vocational counselor, who plots to have Kris shanghaied to Bellevue Psychiatric Hospital, Kris ends up in a court competency hearing where his freedom and the joys of childhood fantasy are at stake. This holiday tale is one we want to believe in, where love, decency, and generosity of spirit are their own rewards. Share this perennial holiday favorite with the entire family this season! 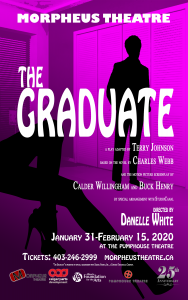 January 31 to February 15, 2020
Adapted by Terry Johnson, based on the novel by Charles Webb and the screenplay by Calder Willingham and Buck Henry
Directed by Danelle White

Benjamin Braddock is a confused young man. Having spent four years achieving a brilliant scholastic record, upon graduation he finds himself adrift, uncertain about his future, disconnected from his purpose, and increasingly alienated from the upper-class, suburban, “plastic” world of his parents in 1960’s Southern California. Fighting panic and boredom, he is deeply conflicted but ultimately willing when Mrs. Robinson, the unhappily married, alcoholic, and dangerously charismatic wife of his father’s business partner, tempts him into an affair. Benjamin’s tenuous existence of lazy days and stolen nights falls apart when he falls in love — with Elaine — Mrs. Robinson’s upbeat, optimistic daughter. 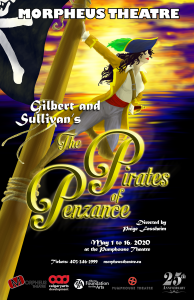 The Pirates of Penzance

Morpheus Theatre is pleased to announce that the G&S Junior Theatre School program is back for a 9th season.

In October 2019, we will be continuing to offer both a Junior class for students 9 to 12 years old, and a Senior class for students 13 to 17 years old. The program gives youth an opportunity to expand their acting skills and challenge themselves with the lyrics and patter of a Gilbert and Sullivan operetta. The Senior class will also include more advanced acting skills and choreography.

Both classes will run Saturday mornings from 10:00-11:30 beginning mid October. Classes will include professional instruction in Acting and Voice and the program will culminate in two youth performances on the set of our mainstage production in the Victor Mitchell Theatre at the Pumphouse Theatre.